In Q1 of this year, Adobe released a handful of new features and improvements to Marketo…the standout/fan favorite of the release was Marketo’s new executable campaigns functionality.

What I’m Pumped About:

What I’m Bummed About:

What are Executable Campaigns?

Executable campaigns are similar to Marketo’s requestable (is that a word? 🤔) campaigns and are a way to tie together multiple smart campaigns. Both are very efficient in helping decrease race conditions and centralizing repeatable operational smart campaigns that can be called from multiple places in your instance.

How are Executable & Requestable Campaigns Different?

Why this is freakin’ awesome:

Okay, so this may not seem like a huge difference at first, but it gives us Marketo nerds an additional layer of control when it comes to automation. Meaning, it will help cut out on race conditions in our instances and keep things more orderly.

Okay-this is probably my favorite use case. Like most of you, interesting moments have been difficult to manage. You can either keep them at the program level and use program tokens to make them super custom (but harder to manage and make changes in the future cause you have like 50+ flow steps each in their own program if you want to make changes) The other option is creating centralized interesting moment smart campaigns using smart campaign trigger tokens (easier to manage and make changes to because there’s only one change BUT the trigger tokens kinda stink and aren’t super custom)

End result in MSI in SFDC:

One of the main uses cases for executable campaigns is anytime you have a smart campaign that is taking action on a lead, and one of the flow steps is dependent on some other field that needs to be populated PRIOR to that flow step processing.

One example I stumbled upon involves sending slack notifications to our sales team from Marketo via a webhook (the flow step that is dependent on a data value). We have a couple different slack notifications that go to our sales reps so there are multiple smart campaigns calling the webhook. BUT in order to @ mention a user in slack, you need the users specific Slack ID (the dependent field)

So instead of populating a lead’s “Sales Owner Slack ID” field in every single smart campaign sending notifications to Slack, I just created one using an executable campaign that I can call from anywhere in our Marketo instance.

Sound confusing? I’ll show you below👇🏻

Because of the power of executable campaigns, I only have to create one central “Slack ID Standardizer” campaign that I can call from each of my smart campaigns sending slack notifications (saves me a lot of work)

Here’s an example from one of many smart campaigns that calls the Slack webhook for lead notifications (flow step 1 calls the “Slack ID Standardizer” executable campaign above):

Pretty cool stuff, huh? And the best part is, nestable (is that a word? 🤔) executable campaigns seem to being coming soon from Adobe. Anyways, if you made it all the way down here, wow! Thanks for reading, hope ya learned something 🤓

About The Author — Brad Couture 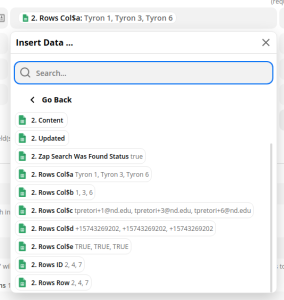