Mike Rizzo: All right, Chris, thank you for joining us for another episode of MOOPs TV. Um, we are really excited to be learning from all of these guests that are coming on, just like yourself. You kind of teased and before we started recording here, This is a pretty fun one. So I’m excited to learn from you.

I’m sure the audience is too. Um, so to kick things off, let’s just do some introductions. You know, who are you? What, where do you work? Uh, and how long have you been in the role? That kind of stuff when you share that with your

Chris Hoell: great, uh, thanks for having me. My name is Chris Hale. I’m currently head of marketing ops for a startup in Seattle, TwinStrand Biosciences.

Bio-science. Um, I’ve been with twin strands for about five months now. Uh, but I’ve been in marketing ops for about 12 years now. Total, it’s going all the way back to, uh, uh, days as, uh, getting, uh, getting my feet wet with a company called systems maintenance services, basically building out the stuff from scratch with a company that.

Chris Hoell: Yeah. I went to school. I got a marketing degree from college, so I knew what I wanted to do. It’s just, it was 2012, you know, kind of me was not the greatest for marketing people. Uh, so I was in a sales role and I saw the need, I built it out.

Um, we’ll put together a business plan, pitch the CEO, and he goes, no, go with it.

Mike Rizzo: so let’s get into it. So pre moops, you know, what was it that you were trying to accomplish and what systems were you working in? And then, you know, What happened? Like what caused this thing to break?

Chris Hoell: Well, what happened was, um, I was managing the email operations team for Getty images. Uh, it was actually my first week on the job. Um, I had just moved from Minneapolis to Seattle, um, really just getting my feet wet. Um, and we were sending out a, um, kind of our weekly kind of image, email to our entire customer base.

Uh, over a million people in our contact base. Oh yeah. Uh, so I was working with, uh, our guys to basically get the S uh, build out the email, get a test, to get it sent out whatnot. Uh, we were working at Eloqua Helicos our primary system. Uh, but we were, um, we had a great developers at Getty and our developers were pulling, we’ll put together a script that actually pulled imagery from our Getty, uh, from our.

Okay systems, we have millions of images, right? So we pull the kind of a relevant image that would show up, uh, based on, you know, whoever the, the audience was. Um, so we put it together and did it, did the tests and everything looked great. Uh, and we built this out, so it would land at nine o’clock local time across the globe.

first thing we did is I stopped. It said, okay, we can’t do this. Um, let’s put a stamp ditch the script, put a standard image in, so we can just keep going across to everybody else through the rest of the globe. But yeah, it was, oh boy. If you had clicked on that image, the first thing you see. Uh, it’s just, it’s just a naked body

Oh my gosh. So, oh my goodness. What a, what a crazy, I imagine that you had a different, obviously you probably weren’t intending on sending out a bunch of naked imagery, but. The I’m imagining you have a bunch of different audiences that you’re trying to manage different content for in general. So you’re trying to test across all that.

Uh, and so, uh, you know, maybe there was a break in the testing chain or something, right? Well,

Chris Hoell: actually the testing works fine, but what we didn’t, we just didn’t think of it was that just purely pulled into content and pull the completely, it just pulled a completely random image when it, when it sent tested it.

Great. It looked fine. No, no breakages it’s but when it, we hit hit the live go, it just ended up holding a random image. Got it.

Mike Rizzo: That was the boy. Yeah. Oh boy. So, so who actually noticed it? I mean, you sounded like you logged in and got the 20 emails, but like, do you happen to remember which of the. You know, 20 came in

Um, it was a bunch of our, we have global marketing teams. So there was a bunch from, um, like our, our European teams. They were, they were seeing it. Um, and then we had some salespeople in New York who saw it. Um, yeah, my boss was. Angry at the time. And when we looked at, when we figured out what happened, you know, you have to laugh at it.

Cause it’s like, I mean, we didn’t do it on purpose and I have a weekend and I’m sitting here going, oh shit, am I going to get fired like three days on the job? Because I love who okayed this.

Mike Rizzo: Right. Oh, uh, okay. So, so to remedy it, you wrote a while you stopped for. From going stop. The

Chris Hoell: email dropped a new image on, and then, uh, going forward, we figured out that we put the script in, we have to, our developers had to put that lovely exclude nudity.

Mike Rizzo: Yeah. Pull that or exclude that feature, I suppose.

Mike Rizzo: right. So, so moving beyond the MOOCs, um, you know, W, what did you learn during the remediation process? Did you try to implement any new procedures for, for things like this, or is it just purely that you just wrote this new script and, you know, did your process change in any way, uh, in order to avoid mistakes like that in the

Uh, we did put a final review on, um, so we did put a little bit of a delay between like go live so we could see it. Uh, and I had one of my guys. Basically set up on my, I felt so bad. They would sit up all night and watch the drops go. Make sure everything was okay. Yeah,

Mike Rizzo: totally. Oh, my dogs are going off today.

So this is a live recording, everybody. Uh, and so the final thoughts, what would you say to someone who, uh, you know, has made a similar type of mistake? Just, you know, obviously maybe not sending out, uh, something as exciting. Content-wise as maybe yours was, but just generally, you know, making mistakes like this in a review process.

And what would your advice be to fellow marketing and rev ops professionals was out there?

Chris Hoell: Um, my biggest thing is, you know, you could put all the processes and checks in the place and mistakes are gonna happen. You know, we’re human. And the big thing I always told my team, when we make a mistake, you know, we’re not curing cancer, you know, let’s fix it.

Mike Rizzo: yeah. Without a doubt. Well, good deal. Thank you, Chris, for sharing your moves with us.

That is definitely an interesting one to say the least, but like my goodness, what a scary thing to. Wake up to on a weekend and see 20 emails about, you know, some expensive content being sent out to a large set of people. But it sounds like you guys put a nice fix in place and you learn something from it.

So thank you for joining us on MOOPs TV. Really appreciate it. 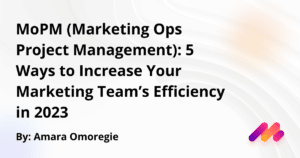 Ownership of the Project Management Function for Marketing Teams In the State of the Marketing Operations Professional Report for 2022 by MarketingOps.com, there were a number of interesting findings as it pertains to roles, responsibilities, and the tools that we use in our day to day professional functions. As Revenue 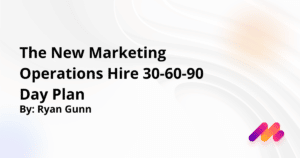 It’s your first day in a new job. Congrats! Feeling overwhelmed yet? When a company decides to open a new marketing operations position, it’s usually because something is already broken and needs fixing. Before you jump straight into problem-solving mode, consider how you can use your first 90 days to