Jessica Meyers: [00:00:00] Hey everyone. Thanks for joining us for another episode of MOOPs TV that is up. What’s gonna be posted by me, Jessica Meyers. Um, and joining us today. I have Rachel Squire. Uh, so Rachel, I’d love for you some quick intros. Um, I obviously said your name already, but who are you and where do you work?

And I’ve been working in everyone here for about a year. Awesome.

Jessica Meyers: So Bennett Tasktop for about a year, but what about, how long have you been in the general marketing?

Jessica Meyers: uh, veteran, uh, at this point, um, when in your career did the mistake, you’re going to chat with me about today.

Rachel Squire: Happen. Way too early, like early enough that you get super freaked out about the [00:01:00] future of your career?

Jessica Meyers: Uh, nothing like a little early career anxiety.

Okay. So tell me kind of what you were trying to do, um, in the mistake that’s happened.

Rachel Squire: So this is right when like all the Canada spam laws were coming out and like you’re hearing about them. And we, I have prior worked with an agency to learn Marchetto and they had got us all set up and everything, and then I graduated and then they weren’t there anymore to support me.

Had to do this project all by myself. And I was so excited because it was my first, like really big project, so low and we’re working in Marketo and I have everything set up ready to like, um, coordinate people’s updates, whether it was explicit or implied, like if they’re a customer or whatever, I’m from Canada.

And so everything’s up and running, ready to go. I tested all of the [00:02:00] opt-in stuff. Pretended I got a VPN from Canada. Everything. That’s awesome. One thing I did not do, what happens is I come into work the next morning after this launches. And I have an email in my inbox saying, Hey, you’re going to be unsubscribed.

If you don’t continue to opt in to receive our emails. And I’m like, like all the flood like drops down into your stomach and you’re freaking out. You’re like, okay, I did something wrong. Hopefully it’s just cause my VPN was set to camp. There’s something I don’t know what’s going on. So I’m like quickly, you know how you like it in Marketo and you’re like frantically trying to figure out happen.

I go into Marketo, try to see. What’s going on. I realized that basically the entire freaking database got my email saying you’re going to be unsubscribed from this. And next thing I know we’ve got people from the whole company, like talking about it, like, why did I get this email? I’m like, why are you unsubscribing me?

Jessica Meyers: Um, to this day, do you know what caused it? Was it just like. So you said Marketo says Smartlist logic error or like kind of more specifically?

Rachel Squire: Oh yeah, I hear, I was thinking like, um, the agency always told me to optimize your campaign. So like add extra filters and blah, blah, blah. So I was like adding extra filters to do people who like, if you’re unsubscribed, you don’t need this email.

If you’re whatever, like 13 filters and I set it to any, instead of all. And it, you know how, like it takes forever to load the number of people that’s going to process. I just go home because I’m like, I know I did it right. I’m just going to leave. It was thing, the state

Jessica Meyers: I’ve had, um, one of those as well.

And mine was definitely later in my career than right at the beginning where I did the, any all.

So it sounds like pretty much everyone noticed it, [00:04:00] uh, in this scenario. Right. Um, including like, C-suite and stuff.

Rachel Squire: Um, yes. One of the first people who asked me what happened was the CEO, because he didn’t want to be subscribed. So like, I’m pretty sure I was as bad as the tomato when he like walked up to my desk and inquired.

He’s very nice about it. Probably nicer than I deserved actually. But.

Jessica Meyers: Um, so once it was like public knowledge, um, what did you kind of do at that point to remedy the situation?

Rachel Squire: Um, it was the worst day because this was before a board campaign. And so I just had to sit there and watch the emails go on all day and I called Marketo support and I called the agency we had worked with, and like, there was no board campaign.

They’re all like, you just gotta let it happen. And, um, it was really, really, really depressing. And so I did create a re like another campaign that had removed [00:05:00] from flow. And I tried to remove as many people out as I could. And it doesn’t, it, it did end up getting like half of the list or something, but that still sucks.

So, you know, but, and then of course, like I removed some Canadians, so I had to do it again the next day to get the actual Canadians and the whole thing was a giant mess.

Rachel Squire: So lucky for me, this was, um, we were trying to get ahead of the game. So it was before the Canda spam laws actually like were live or whatever. So we kind of got away with a little bit of it. Um, we sent an oops email to everyone who got it, everyone who was delivered to, and, um, I, I don’t remember exactly what we [00:06:00] did for internal communications, but I definitely went around and per say, apologize to every single C suite member.

Jessica Meyers: Uh, nothing like a little humility beyond the unfortunately painful lesson of letting your smart campaign. Limits load, um, which we’ve learned the hard way. A couple of us at least. What else did you learn during your remediation?

Rachel Squire: process? Um, the number one thing I learned, actually it was less of an ops thing and more of just like a professional thing, but own up to your mistakes right away.

There is no getting around when you screw up, especially when you’re in this line of work, people are going to know, and like, if you don’t own up to it, you’re just like, like a jackass at the end of the day. And so take responsibility. You’ll just be better off for it.

Jessica Meyers: Um, yeah, I very much agree. Um, Do you have any processes?

Did you put any processes in place [00:07:00] at that role or any processes that you’ve taken with you into other roles? Uh, to avoid mistakes like that in the future?

Rachel Squire: Guessing. Yes. So personally I will never, ever, ever run any campaign unless I can see how many people are qualified for it. Um, I am the first thing I do at any job now is I go look at the smart campaign limits and make sure it’s less than the entire database in like the admin.

Jessica Meyers: I love that I hadn’t really thought about, um, ever checking the admin limits, uh, to make sure that compliments the rest of the whole database, but that’s a really nice, um, like, oh shit, Kelsey. [00:08:00] Uh, cool. So a couple of final thoughts. Um, What would you say to the inevitable person that makes a similar mistake at some point in their career?

Rachel Squire: Um, kinda like I said earlier, definitely own up to it. There’s no getting around it and people will honestly respect you for having the integrity to do that. And also just like, be really careful when you do work. Easy in a job when you do the same kind of job every day in the same work for it to kind of get, um, not mundane, but just repetitive.

Like you feel like you’re clicking the same buttons and you’re doing the same stuff, but that doesn’t mean it’s cool to get lazy and not QA your work.

Jessica Meyers: Uh, yeah, QA super, super important. Um, I know my personal role is like, nothing goes out the door without extra eyes on it. So, um, what more general advice do you have for any fellow marketing rev ops [00:09:00] professionals listening in.

Rachel Squire: don’t let mistakes make you like really sad, because I also did that and I had a super rough time and lost all come with like all my confidence in my career, my abilities, which is stupid because everyone makes mistakes, no matter what you’re doing. And, um, yeah, I would say like, don’t let things like that.

Get you down, just make sure you use them as learning

Jessica Meyers: experience. I love that. That’s a, I think a good note to end on. Uh, so thanks so much for taking the time to chat with us today. Rachel, I’m excited to share this one.

Rachel Squire: Thanks for having me.

About The Author — Mike Rizzo

Mike Rizzo, is the Community-led Founder of MO Pros and MarketingOps.com. With his extensive background in marketing Mike helped build, launch, manage and optimize Mavenlink's first-ever user community and Client Advisory Board programs. He is the founder of MO Pros - The Community for Marketing Operations Pros that is growing with an average of 110 new members every month. He is also the co-host of the podcast called Ops Cast by MO Pros. As the founder of MarketingOps.com, Mike is taking a community-led approach to building resources that are purpose-built for MO Pros. 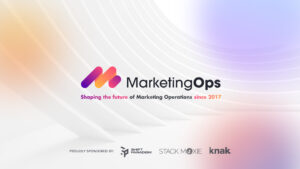